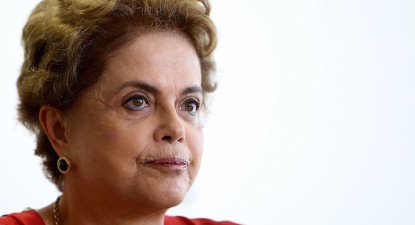 Over the past two years we’ve followed the expanding corruption story in Brazil where billions of dollars have been funnelled from the public purse to politically connected intimates. But time is running out for Brazil’s deeply implicated President Dilma Rousseff. She has applied every possible tool to ward off a looming impeachment, including recalling her once popular predecessor to the cabinet. But the Brazilian judiciary immediately reversed that decision and as the complicit switch sides rather than join others in jail, the pressure keeps mounting. The most devastating blow this far landed yesterday with news that it took just 10 minutes for one of Dilma’s ruling coalition parties to abandon her. Politicians are masters of knowing when to drop lost causes. If that starts a trend, as predicted, Brazil’s President will be unable to overcome an impeachment vote scheduled for next month. The parallels with South Africa are stark. In Jacob Zuma, it too, has a President heavily implicated in a corruption scandal (Guptagate). He is also a deeply unpopular socialist (Edelmans research says only 16% trust the SA Government) and like Rousseff, bet on support from membership of a global alliance (BRICS) that’s proving a hollow shell. Zuma, like his Brazilian counterpart, is using every possible level of the State (Hawks v Gordhan) and evoking emotional propaganda (“racism“, “white capital“) to defend himself. But like Rousseff, Zuma’s nemesis is the judiciary. In Constitutional Democracies, truth overcomes any resources mustered by seemingly impregnable politicians. Hope springs. – Alec Hogg

(Bloomberg) — A move by Brazil’s largest party to depart from the ruling coalition on Tuesday further weakened the government and raised the odds that President Dilma Rousseff will lose the impeachment vote.

The latest blow capped a month in which the least popular president in decades faced a wave of massive protests, fought accusations that she tried to obstruct a corruption probe, and at least temporarily lost a battle to install her predecessor and mentor in her cabinet. Rousseff, who was slated to embark to Washington for a nuclear summit this week, canceled the trip after the Brazilian Democratic Movement Party, or PMDB, left her alliance.

“Today was without a doubt a turning point,” said Cristiano Noronha, vice president of political consulting firm Arko Advice. “Impeachment will be won or lost after various battles, but the government lost this first big battle, and is now greatly weakened.”

The PMDB’s decision is the latest twist in a drama that started two years ago with a corruption scandal that has rocked the country’s political and business community to its core. Federal police have arrested leading corporate executives and politicians, including officials from Rousseff’s Workers’ Party. The detainment of her predecessor, Luiz Inacio Lula da Silva, in early March led to the biggest anti-government protests on record.

Research company Ibope is scheduled to publish the results of an opinion poll Wednesday morning that will gauge whether Rousseff’s setbacks in recent weeks weighed further on her popularity. Only 9 percent of Brazilians said Rousseff’s administration was good or great in its latest survey, published in December.

“Listening to the clamor of the streets, the PMDB couldn’t have done anything else but leave the government,” said Manoel Junior, a PMDB congressman who sits on a lower house committee that will recommend whether to impeach the president. “The government didn’t get it right on politics and got it wrong on the economy.”

Brazilian stocks on Tuesday extended their biggest monthly rally since 1999 as investors bet that an end to the political crisis is approaching and will bring with it a resolution to the recession. The currency has advanced 9 percent this year against the dollar, making it the biggest gainer among major currencies tracked by Bloomberg. 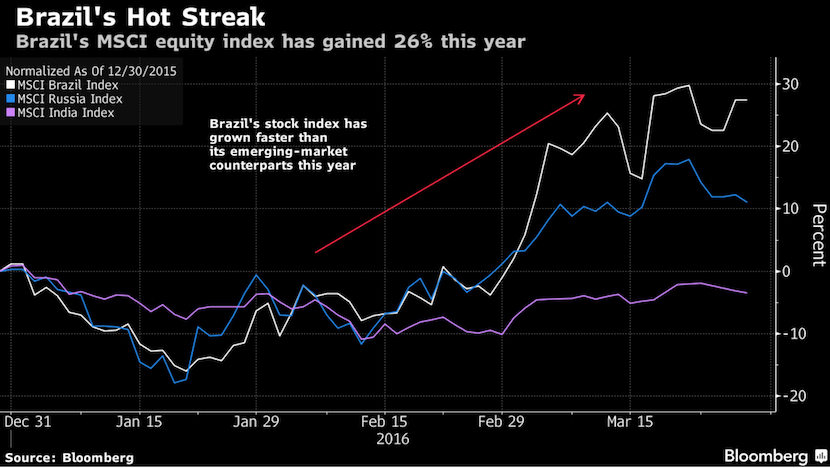 Yet the road to Rousseff’s possible ouster is anything but clear, and the president has repeatedly said she won’t resign. Though she didn’t make any public comments after the PMDB’s announcement, one of her key advisers, Jaques Wagner, told reporters the party’s split gives the administration a chance to rebuild the government before the impeachment vote. “The timing of the decision was positive,” he said.

The lower house of Congress is expected to vote on impeachment in April. If two-thirds of lawmakers support the president’s removal, the process moves to the Senate, which could decide in May whether to end her tenure.

The PMDB on Tuesday told its members to quit any posts they hold in the government, including leadership positions in six ministries. While the administration will offer its remaining allies the posts to secure their loyalty, few will want to bind themselves to a doomed president, said David Fleischer, professor emeritus of politics at the University of Brasilia.

“The PMDB leaving is a big game changer,” he said. “This makes her impeachment much more likely.”

PMDB President Michel Temer, who is also the country’s vice president, has the most to gain from Rousseff’s removal from office. He hasn’t publicly opposed the president and didn’t participate in Tuesday’s meeting. Yet he is, in fact, one of the intellectual authors behind the strategy to split from the government, according to a person briefed on the discussion.

The PMDB’s announcement also has historical significance given the pivotal role the party has played in national politics since Brazil’s return to democracy in 1985. The PMDB since then has held the presidency or played the role of coalition partner, even in the government of Fernando Henrique Cardoso, whose Brazilian Social Democracy Party is a leading rival to Rousseff.