“It may be boldly asked where can the man be found, possessing the extraordinary gifts of Newton, who could suffer himself to be deluded by such a hocus-pocus, if he had not in the first instance willfully deceived himself;

Only those who know the strength of self-deception, and the extent to which it sometimes trenches on dishonesty, are in a condition to explain the conduct of Newton and of Newton’s school. To support his unnatural theory Newton heaps fiction upon fiction, seeking to dazzle where he cannot convince.

***
In whatever way or manner may have occurred this business, I must still say that I curse this modern history theory of Cosmology, and hope that perchance there may appear, in due time, some young scientists of genius, who will pick u courage enough to upset this universally disseminated delirium of lunatics.  ~ Goethe

Belief in a flat Earth is found in mankind’s oldest writings. In early Mesopotamian thought, the world was portrayed as a flat disk floating in the ocean, and this forms the premise for early Greek maps such as those of Anaximander and Hecataeus of Miletus.

Some theologians and biblical researchers maintain that at least some of the writers of the Old Testament books of the Bible had a Babylonian world view, according to which Earth is flat and stands on pillars, and is covered by a solid sky-dome (the Firmament). The firmament was the heaven in which God set the sun ( Psalm 19:5) and the stars ( Gen 1:14). The flat earth concept appears to be mentioned in ( Isaiah 40:22) where it speaks of God “dwelling above the circle of earth” which means a literal circle, from the Hebrew word “chuwg”.

Daniel 4:10-11 KJV “And thus were the visions of mine head in my bed; I saw, and behold a tree in the midst of the earth, and the height therefore was great. The tree grew, and was strong, and the height therefore reached unto heaven, and the sight thereof to the end of all the earth:” The implication being that if the world were spherical then not everyone could see this great tree which is the world tree the axis mundi.

They could all see it only if the world were flat. The prophet Daniel at this time was captive in Babylon during the reign of King Nebuchadnezzar. The Egyptians had a similar view except they were the center of the universe. The Egyptian goddess Nut and the outstretched wings of the solar disk represented the firmament.
For more information on the ancient flat earth theory go to:http://www.edwardtbabinski.us/geocentrism/scientific_creationism.html.

“In the imagination of the Mesopotamians (the Sumerians, Elamites, Babylonians and Assyrians), the earth was a flat disc, surrounded by a rim of mountains and floating on an ocean of sweet water. Resting on these mountains was the hemispherical vault of the sky, across which moved the stars, the planets, the sun and the moon. Under the earth was another hemisphere containing the spirits of the dead. The Mesopotamians visualized the whole spherical world-universe as being immersed like a bubble in a limitless ocean of salt water.”
(http://kl4www.ki.ku.dk/Samfund/Book.pdf) 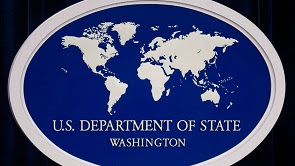 The UN building is 39 (13x3) stories high and sits on land donated by Mason David Rockefeller. The United Nations flag shows the globe divided into 33 sections encircled by olive branches. The flag also happens to be blue just like the first 3 “blue degrees” of Masonry. There are 13 degrees of York-Rite Masonry and 33 degrees of Scottish-Rite. 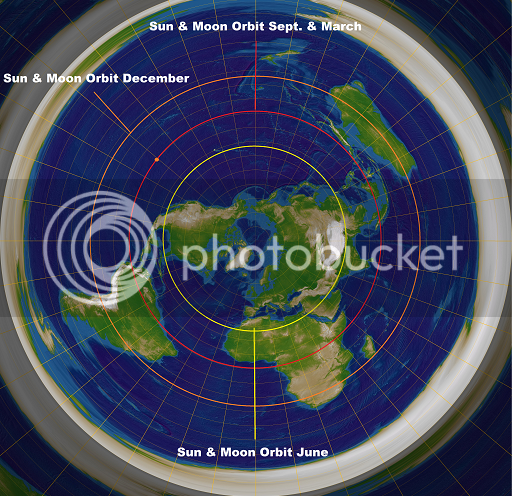 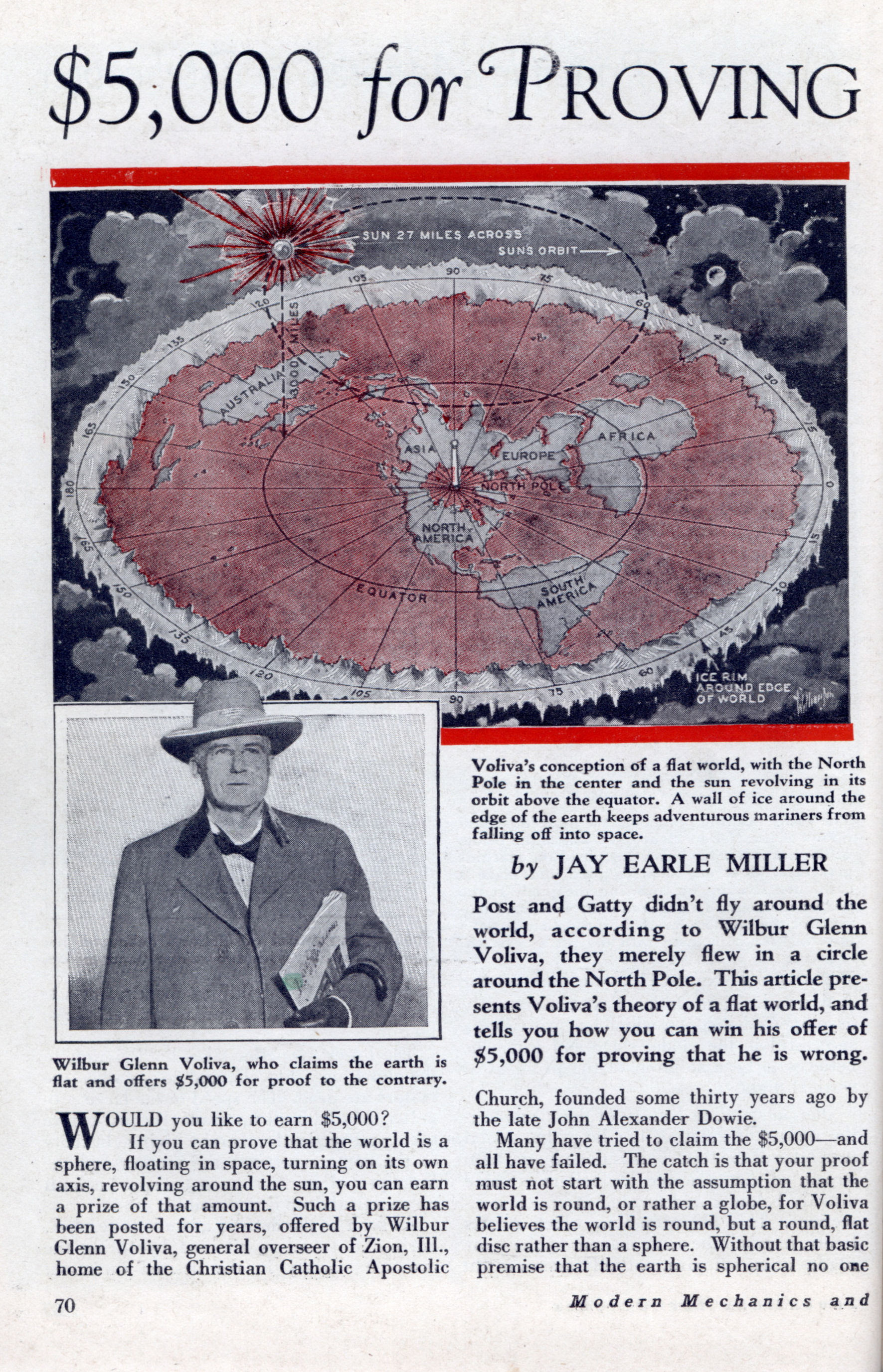 $5,000 for Proving the Earth is a Globe
by JAY EARLE MILLER

Post and Gatty didn’t fly around the world, according to Wilbur Glenn Voliva, they merely flew in a circle around the North Pole. This article presents Voliva’s theory of a flat world, and tells you how you can win his offer of $5,000 for proving that he is wrong.

WOULD you like to earn $5,000? If you can prove that the world is a sphere, floating in space, turning on its own axis, revolving around the sun, you can earn a prize of that amount. Such a prize has been posted for years, offered by Wilbur Glenn Voliva, general overseer of Zion, 111., home of the Christian Catholic Apostolic Church, founded some thirty years ago by the late John Alexander Dowie.

Many have tried to claim the $5,000â€”and all have failed. The catch is that your proof must not start with the assumption that the world is round, or rather a globe, for Voliva believes the world is round, but a round, flat disc rather than a sphere. Without that basic premise that the earth is spherical no one has found an absolutely convincing proof that Voliva is wrong when he describes his disc-shaped world, firmly planted on its foundations, surrounded by a wall of ice to keep mariners from falling off the edge, and surmounted by a crystal dome in which the stars are hung like chandeliers to light the night. Nor can you submit proof to absolutely disprove the belief of Voliva that the sun, instead of being an 800,000 mile ball of fire more than ninety millions of miles away is really a fairly insignificant affair, only some 27 to 30 miles in diameter and about 3,000 miles above the earth. Or that the sun and moon move in orbits while the earth stands still, that the moon is about the same size as the sun and the same distance from the earth, shines by its own light, and moves in much the same orbit as the sun.