A pawn in their game

The collapse of Popular Will under the weight of the violent campaign of destabilization it ran alienated large sectors of the public and wound much of its leadership up in exile or in custody. Guaidó had remained a relatively minor figure, having spent most of his nine-year career in the National Assembly as an alternate deputy. Hailing from one of Venezuela’s least populous states, Guaidó came in second place during the 2015 parliamentary elections, winning just 26% of votes cast in order to secure his place in the National Assembly. Indeed, his bottom may have been better known than his face.
Guaidó is known as the president of the opposition-dominated National Assembly, but he was never elected to the position. The four opposition parties that comprised the Assembly’s Democratic Unity Table had decided to establish a rotating presidency. Popular Will’s turn was on the way, but its founder, Lopez, was under house arrest. Meanwhile, his second-in-charge, Guevara, had taken refuge in the Chilean embassy. A figure named Juan Andrés Mejía would have been next in line but reasons that are only now clear, Juan Guaido was selected.
“There is a class reasoning that explains Guaidó’s rise,” Sequera, the Venezuelan analyst, observed. “Mejía is high class, studied at one of the most expensive private universities in Venezuela, and could not be easily marketed to the public the way Guaidó could. For one, Guaidó has common mestizo features like most Venezuelans do, and seems like more like a man of the people. Also, he had not been overexposed in the media, so he could be built up into pretty much anything.”
In December 2018, Guaidó sneaked across the border and junketed to Washington, Colombia and Brazil to coordinate the plan to hold mass demonstrations during the inauguration of President Maduro. The night before Maduro’s swearing-in ceremony, both Vice President Mike Pence and Canadian Foreign Minister Chrystia Freeland called Guaidó to affirm their support.
A week later, Sen. Marco Rubio, Sen. Rick Scott and Rep. Mario Diaz-Balart – all lawmakers from the Florida base of the right-wing Cuban exile lobby – joined President Trump and Vice President Pence at the White House. At their request, Trumpagreed that if Guaidó declared himself president, he would back him.
Secretary of State Mike Pompeo met personally withGuaidó on January 10, according to the Wall Street Journal. However, Pompeo could not pronounce Guaidó’s name when he mentioned him in a press briefing on January 25, referring to him as “Juan Guido.” 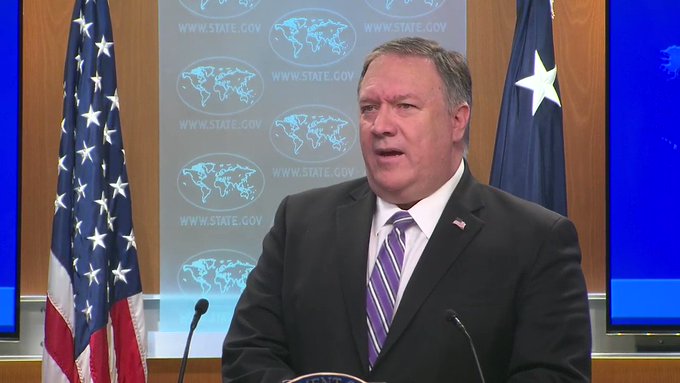 By January 11, Guaidó’s Wikipedia page had been edited 37 times, highlighting the struggle to shape the image of a previously anonymous figure who was now a tableau for Washington’s regime change ambitions. In the end, editorial oversight of his page was handed over to Wikipedia’s elite council of “librarians,” who pronounced him the “contested” president of Venezuela.
Guaidó might have been an obscure figure, but his combination of radicalism and opportunism satisfied Washington’s needs. “That internal piece was missing,” a Trump administration said of Guaidó. “He was the piece we needed for our strategy to be coherent and complete.”
“For the first time,” Brownfield, the former American ambassador to Venezuela, gushed to the New York Times, “you have an opposition leader who is clearly signaling to the armed forces and to law enforcement that he wants to keep them on the side of the angels and with the good guys.”
But Guaidó’s Popular Will party formed the shock troops of theguarimbas that caused the deaths of police officers and common citizens alike. He had even boasted of his own participation in street riots. And now, to win the hearts and minds of the military and police, Guaido had to erase this blood-soaked history.
On January 21, a day before the coup began in earnest, Guaidó’s wife delivered a video address calling on the military to rise up against Maduro. Her performance was wooden and uninspiring, underscoring her husband’s political limits.
While Guaidó waits on direct assistance, he remains what he has always been – a pet project of cynical outside forces. “It doesn’t matter if he crashes and burns after all these misadventures,” Sequera said of the coup figurehead. “To the Americans, he is expendable.”
Max Blumenthal is an award-winning journalist and the author of several books, including best-selling Republican Gomorrah, Goliath, The Fifty One Day War, and The Management of Savagery. He has produced print articles for an array of publications, many video reports, and several documentaries, including Killing Gaza. Blumenthal founded The Grayzone in 2015 to shine a journalistic light on America’s state of perpetual war and its dangerous domestic repercussions.

Dan Cohen
Dan Cohen is a journalist and filmmaker. He has produced widely distributed video reports and print dispatches from across Israel-Palestine. Dan is a correspondent at RT America and tweets at @DanCohen3000.